Sign UpLogin
You are here: Home / Books / Mistress of Purity 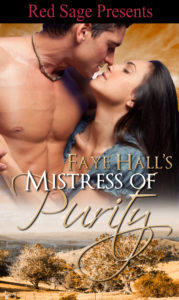 …She had seen something that would continue to haunt her and follow her wherever she went.

When she had married the Earl of Malloy, Prue had hoped to be able to hide under his name and at his out of town estate.

What she had not thought was to become his son’s MISTRESS OF PURITY.

Gareth had sworn never to return to his father’s estate, not to the life he had once thought to have there.

He had hoped that the man he had grown in to was no longer hoping to find the love of a woman he knew could not possibly exist.

What Gareth had not wanted was to find his comfort in the arms of his father’s young wife…a woman he knew was hiding far more than just one secret from him.