Sign UpLogin
You are here: Home / Books / My Gift To You

My Gift To You 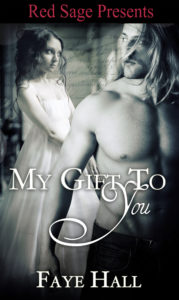 As a child, Rush Mullens saw her parents murdered before her eyes. She didn’t know the men responsible, but she would find them. She wanted revenge. She didn’t think she would also find a boy she could love more than her own life; a boy who grew into the man who would steal her heart.

She couldn’t let him endanger her plans for revenge, nor could she ignore that she was willing to risk all – her past, her life, her reputation – just to sample an ounce of passion from this man.

Bailey Maston wanted to find a woman – the perfect woman – to give his heart to. He wanted to trust that she could exist. Everything he had seen in his young life, both at home and in society, told him what a foolish dream this was.

When he finally discovers the truth of Rush’s life, and the revenge she is enacting, will he allow the betrayal to keep him from the woman he yearns for…a woman he craves to free his well-guarded heart?