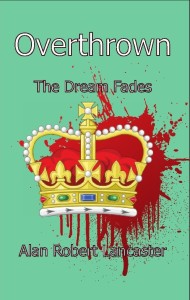 Braenda’s renewed desire threatens to take over Ivar’s life when she takes the form of the innkeeper’s wife Aelfthryth. In OVERTHROWN he offers his sword to the young king Eadgar and, with his friends, rides to Pevensey and Hastings to see how Eadgar’s ships might stop the flow of William’s supplies. In a close fight at Rochester to free hostages held by the duke’s half-brother Odo, Ivar loses more friends.

Meanwhile, in burning his way around the southern shires William bullies the Witan into yielding at Berkhamstead. Ivar learns of the Witan’s betrayal of Eadgar when he returns to Thorney, and evades arrest by a Norman knight, Gilbert de Warenne,sent by William to guard his rival. At the ‘Eel Trap’ again Ivar meets Harold’s second Eadmund on his way to his father’s hunting lodge near the River Lea at Leyton. Here Eadmund’s elder brother Godwin and younger brother Magnus welcome Ivar and outline their aim of raising an army against the Norman duke. Ivar will have the task of overseeing their training.

At Christmas Ivar and friend Saeward sneak into Eadward’s abbey church to spy on William’s coronation and escape undetected, but are captured resting overnight near Hampstead. Read this gripping tale to find out if Ivar escapes the clutches of the newly-crowned William.