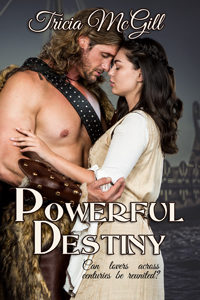 It is 850AD and Norse warrior Rolf lands on the shores of East Anglia determined to take revenge on a Celtic clan. Following a fierce battle, where the Celts are savagely killed, Rolf comes face to face with the daughter of the slain Celtic leader. So stunned by the beauty, along with the courage of Brigid, he is convinced that his Three Fates of Destiny brought them together. Resolved to make this woman his own, he spares the lives of the captured Celtic women and children and takes them back to his homeland across the ocean.

Strangely drawn to the Norseman who is so sure they are destined to be together, Brigid must fight against succumbing to the wishes of the man who killed her father. Nevertheless, to save her fellow Celtic captives from slavery or worse, Brigid must keep a bargain with the Norse leader—a bargain that will see her tied to him forever.

In present day Cornwall, naturally shy Rolf shares his secluded lighthouse with his wolfhound. An artist, he delights in the rugged scenery and ever-changing weather. While in the nearest bookshop one day, he meets a newcomer to town. Brigid’s unusual personality strikes a chord with him. Not only are both convinced they have met before, but their fascination for Viking and Celtic history forges an unusual bond between them. Outspoken and forthright, Brigid sets out to break down the barrier of reserve and caution Rolf has erected over the years. Is it simply whimsy or can lovers across centuries be reunited?

Rolf stared as if struck, feeling suddenly as confused as the child, for her words were spoken in his native tongue. Then, as the moon drifted out from behind a cloud, Rolf let out a gasp.

The woman stood straight and proud, long hair as black as the night falling to her middle. A band around her forehead secured its flowing beauty. Her clothing was no different from that worn by any other Celtic female encountered in his past, but something about her bearing proclaimed that she was very different in some way. As she touched some sort of talisman at her belt, she muttered what could have been an incantation. Perhaps she was praying to her gods.

In all his life and many travels, never had he seen such a vision of loveliness. Then Rolf cursed beneath his breath. What was he thinking? This was a Celtic female, only fit for becoming a slave. Nevertheless, there was something about this female that told him she would be no man’s slave, no matter how he tried to break her spirit.

Then a thought hit him like a thunderbolt. He had no wish to enslave her, but perhaps he could capture her heart. That idea astounded him so, that he turned away and took a few steadying breaths. As he did, he could clearly see that some of his men were casting odd looks his way as they awaited orders. Who could blame them?

What childish nonsense was this? Never in his many summers was his head filled with such ridiculous notions. Norse warriors did not bother with such fancies—so where did these thoughts spring from. For the first time in many moons, Rolf felt uneasy, more like a boy untutored in love and life.

Stiffening his shoulders, Rolf turned to face her and asked, more to conceal this confusion than anything else. “How is it you speak our language?”

Ignoring his question, she asked one of her own. “How is it you think it your right to invade our country and kill our menfolk?” As she moved a step or two away from the rockface, he noticed she carried a sword with confidence. A confidence unusual for a Celtic female. A few Norse women carried weapons with bravado and these shield maidens were well skilled in battle, but the Celtic women were not known to be so brave and capable in sword battles. In his curious fascination with her beauty, he had failed to see the weapon. Unwise in such circumstances. Celts were not to be trusted, be they male or female.

Rolf gripped his axe handle tighter, as he said curtly, “Perhaps if your menfolk did not put up a fight we might have learned to live side by side in harmony.”

Without flinching, she pressed the blade of her sword into the ground in front of her and as the cloud lifted further, he could see her expression. A small sound of disgust left her perfectly shaped lips. In fact, now he could view her clearly, Rolf wondered if she were a goddess—for she was nigh on perfect in every way. Surely only the gods attained such perfection. The Norse gods and goddesses dwelt in Asgard, so it was believable that the Celts possessed their own haven for their gods.

“You think we could ever reach such harmony?” Her beautiful mouth curved down into a smirk of disdain. “You kill our men; take our women and children as slaves.” Tugging the sword from the ground, she held it aloft. “We are prepared to die before we allow you to take us as your slaves.” At these words, she turned the sword until its hilt hit the sandy ground, and then bent forward until the blade pointed to her body, right below her breast. Clearly all she had to do was fall forward and she would be lost to him forever.