Sign UpLogin
You are here: Home / Books / Princess of Bretagne (Curse of the Lost Isle Book 1)

Princess of Bretagne (Curse of the Lost Isle Book 1) 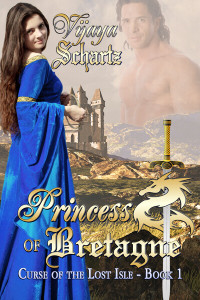 806 AD – Alba (Ancient Scotland)
As the Vikings raid the coast of Alba, Pressine of Bretagne sets out to seduce King Elinas of Dumfries, chosen by the Goddess to unite the tribes against the foreign invader. Elinas, still mourning his departed queen, has no intention to remarry. Head strong and independent, Pressine does not expect to fall for the very attractive, wise and noble ruler… Furthermore, her Pagan nature clashes with the religious fanaticism of the king’s Christian heir, who suspects her unholy ancestry and will stop at nothing to get rid of her.

“…steeped in Celtic history and lore, and also has a basis in Arthurian legends… brings the setting to life with the use of authentic period details regarding warfare and day to day life in a medieval fortress and a Viking camp, some of which can be rather dark and gritty. She also draws on the mythology of the era as the people’s beliefs in the gods of old are challenged by the growth and proselytizing of the Christian church. The clashing of these religions poses a dangerous threat to the heroine of the story who is pagan. There is also a political dimension to the story, not only in regards to religion, but also as the tribes of Briton find themselves invaded by Vikings and in growing need of a high king to unite them… I’m very much looking forward to finding out what’s next for Elinas and Pressine when the series continues with the release of Pagan Queen.” The Hope Chest Reviews