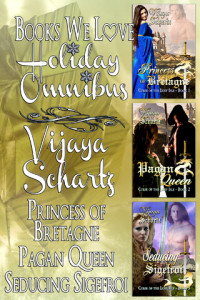 From history shrouded in myths, emerges a family of immortal Celtic Ladies, who roam the medieval world in search of salvation from a curse. For centuries, imbued with hereditary gifts, they hide their deadly secret… but if the Church ever suspects what they really are, they will be hunted, tortured, and burned at the stake.

Princess of Bretagne
As the Vikings raid the coast of Alba, Pressine of Bretagne sets out to seduce King Elinas of Dumfries, chosen by the Goddess to unite the tribes against the foreign invader. Elinas, still mourning his departed queen, has no intention to remarry. Head‑strong and independent, Pressine does not expect to fall for the very attractive, wise and noble ruler… Furthermore, her Pagan nature clashes with the religious fanaticism of the king’s Christian heir, who suspects her unholy ancestry and will stop at nothing to get rid of her.

Pagan Queen
Queen at last, Pressine brings victory to her beloved Elinas and prosperity to their growing kingdom. But she has to contend with the intrigues of Charlemagne’s bishops, spurred by her Christian stepson. She also fears the curse that could bring her downfall. For the love of Elinas, she will tempt fate and become with child. But when her indomitable passion challenges the wrath of the Goddess Herself. . . can she win that battle?

Seducing Sigefroi
To offset the curse that makes her a serpent from the waist down one day each month, Melusine, exiled Princess of

Strathclyde, must seduce and wed a mortal knight, the shrewd and ambitious Sigefroi of Ardennes.

Sigefroi, son of the Duke of Lorraine, suspects Melusine is not what she appears, but her beauty, her rich dowry, and her sharp political skills serve his ambitions. He never expected her to soften his stone-cold warrior heart.

So close to the Imperial court, dangers and intrigue threaten Melusine. War looms on the horizon, a Mermaid was sighted around Luxembourg, and Sigefroi’s bishop brother questions her ancestry. If anyone ever suspects Melusine’s true nature, she will burn at the stake…