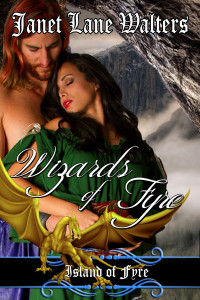 Lorana, sold by her father to the slavers, resides in the harem in the citadel of the wizards. Her desire is to escape before she is given as a reward to one of the two wizard trainees who are competing for a spot on the council. She knows how to brew a cordial from firethorn berries and a poison from the thorns. When Arton, one of the young men is poisoned by the thorns she must care for him. She feels an attraction to him but she must escape. One night she hears the voice of a dragon. She thought the wizards had destroyed all the dragons on this side of the mountains. When the wizards leave to collect men to sell to the slavers, she takes the opportunity to escape with few supplies and a determination to reach the dragon.

Arton is a fledgling wizard and is about to be tested for the council. His mentor has died. His mentor wasn’t his father. The wizard purchased Arton from the slavers years ago. The present chief wizard would like to thwart Arton’s quest because he wants his son and trainee to join the council. Arton and his rival are evenly matched. The escape of Lorana becomes a quest. Which of the young wizards returns her to the citadel will win the competition and gain her as a reward. Cregan the rival decides to search on the desert. Arton chooses the hills. Because of Lorana’s care of him when he was poisoned he is attracted to her and he still craves a seat on the council.

Can Arton find Lorana first and will he make her a prisoner or allow her to remain free?