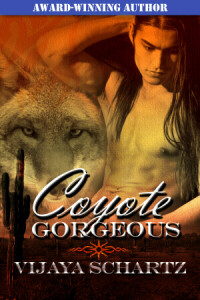 Arizona Game Ranger Madison Huntley, investigating a wild animal attack on a ranch in Cave Creek, discovers disturbing details. If she didn’t know better, she’d say the legends frightening the ranch hand might be true. But Madison isn’t just a wilderness cop. As a biologist and a wild life expert, she believes in facts and science, not scary tales.

Kaletaka, a Hopi Native, enjoys fame among the white man, forging haunting sculptures of half gods, half humans. When he awakens bloody, with no recollection of what he did the night before, he remembers the legends of his tribe, and the meaning of his name. But as hard as he tries, can he escape his destiny?

Can Madison solve the mystery killings and insure the safety of the town? Let alone her own safety? For each step closer to the truth and to Kaletaka, unleashes an unspeakable evil, and no one is safe…

“So many times my theory of who done it was thwarted and yet I was thrilled to stay on the edge of my seat until the very last word just to find out.” Five stars – Book Junkie Reviews