Sign UpLogin
You are here: Home / Books / The Creation of Kaitlyn Jones

The Creation of Kaitlyn Jones 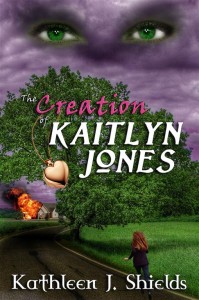 The Kaitlyn Jones Trilogy is for young adults, and is about a heroine named Kaitlyn who discovers while still in high school the gift of telepathy, dreams that see in to the future and super-human strength.

Have you ever seen the future through a dream?  If you knew you could save someone with that knowledge, would you?

Kaitlyn Jones is on a mission; get the man of her dreams to notice her but her mission in life becomes much greater when her ‘gifts’ become clearer. One life-altering dream will drastically change her life, thus significantly transforming her future. Overwhelmed by the exciting ability of telepathy and the exhilarating promise of telekinesis, Kaitlyn Jones embarks on an electrifying journey that will inevitably distort everything in her life.

Finding herself through life’s daily trials, learning of her past through painful losses and horrifying discoveries, Kaitlyn is forced to make difficult decisions amid traumatic unforeseen circumstances that inevitably lead her down the path towards maturity. Feel the emotions erupt as Kaitlyn Jones is sent through a spiral of adventures that only advance her towards her impending destiny.

Now, as Marge stood in the principal’s office crying and begging the police to help her, Kaitlyn knew something serious had happened. Curious, Kaitlyn walked in the office.

“Marge what’s wrong? Is everything okay?”

Kaitlyn’s dream rushed back, pleading to be heard but Kaitlyn put it aside again, afraid of the truth.

A rude cop spoke up first. “Young lady we can handle this, why don’t you just scoot along to your next class?”

Marge ignored the cop and continued to speak to Kaitlyn. “He was supposed to drive up the mountain to Cloudy City to drop off some food I had made for old Mrs. Garrison. When he never came home last night I assumed he stayed the night at her house, but when I called her this morning, Mrs. Garrison said Tom left early last night.”

Kaitlyn’s legs became mush and she nearly toppled over, realizing every bit of her dream could very well be true. Knowing every square inch of that mountain road because of her fathers’ weekly jaunts to the junkyard, she spoke out with honest certainty. “I believe I know where he is.”

By now the cops had had enough of Kaitlyn’s meddling. “Young lady we are handling the situation.”

“Yes but if you’d just listen…”

“Miss Jones,” the principal said. “I’m sure the news of Toms’ disappearance is a little hard to swallow but you’re just going to have to go to class….”

“No buts, Kaitlyn, the police have already sent a car up the road and back again and they saw nothing of Tom or his car.”

“Have you checked just off the road on Highway Ninety? Where the sharp turns are? Because I had this really vivid dream and…”

“A dream?” One of the officers almost laughed.
Kaitlyn tried to explain, but the cops and even the principal smiled.

“Look Kaitlyn,” the cop said. “I’m sure you may have thought you dreamed something but this is real life.”

The cops had just asked Mrs. McKinney if there had been any arguments between her and her son. Their questions did nothing to ease her worries or lead her to believe they were ever going to find her son. They decided she was a distraught mother who didn’t know anything and they treated her as such. So when Kaitlyn spoke so certainly about finding Tom, Mrs. McKinney had to hear her story.

“Please, Kaitlyn, tell me what you dreamed.” Mrs. McKinney suggested.

The principal spoke up. “Mrs. McKinney, I’m sure you are upset about your son being missing but some young girls pranks won’t help us find him any quicker.”

“Kaitlyn, you said it was off of Highway Ninety? Would you be able to show us where?” Mrs. McKinney said.

“Marge, are you really going to listen to this girls ranting about some dream?” the principal asked.

“I apologize for intruding,” Kaitlyn said fast. “But I did have a dream about this, and it very well could be false. But if it is true and I do know where to find Tom, don’t you think it would be important to find out for sure before he bleeds to death from the wound on his head?”

The cops were stunned as Mrs. McKinney spoke up. “He has a wound on his head?”

“In my dream as we went over the cliff and landed in the bushes, he had hit his head on the steering wheel and was knocked unconscious.”