Sign UpLogin
You are here: Home / Family / A Conservative Populace bonded in Ignorance Meets the Face of Change

A Conservative Populace bonded in Ignorance Meets the Face of Change 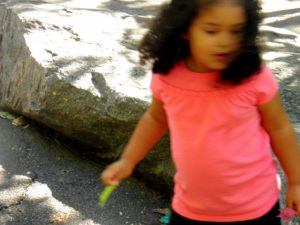 The beautiful café au lait face framed in big dark curls held a measured yet open personality that often set her apart from her classmates in a predominately-white small Georgia town school. An active seven year old who excels in academics and sports, occasionally she enjoyed nana’s chronicles about their shared history. However, on a bright spring day, unusual questions came unabashed and filled with enthusiastic curiosity.  The current political rhetoric made sudden the understanding that she was part of the “others”. The conversation began with “Nana why do they say that we are bad? Dad told me lots about his grandmothers did you know them?  What were they like?”

Strolling together in the sun the grandmother shared stories about the difficult struggles of her father’s German Polish grandmother Elsie. At 15 years old, she escaped from war torn Germany.  Settling in Chicago, Elsie thrived in harsh work as a domestic and married an American Indian soldier. There was newer history of her mother’s parents who crossed the border from Mexico and faced struggles and sacrifices to raise their five children and lived the American dream in northwestern Chicago.

The little girl discovered that her nana’s grandparents were of the Dove tribe of the Cherokee nation and that many generations ago; nana’s fore-bearers arrived on Georgia shores as African slaves.  That now there were parks, and highways that wear that family’s name. Most of all, the little girl came to appreciate her belonging to the growing millions whose ancestry was composed of all that was good about being American.

The term browning of America and all the subtle and not so subtle nuances attached to this populace tag – does little to describe the depth of its influence on the psyche of white American.

As of this writing, our US census reveals that there are 324 million Americans.  Every 29 seconds a foreign-born joins our ranks. We experience a net gain of one person every 13 seconds. Conservatively 30% of our population is composed of non-whites and it is growing.

A new standard-bearer has arrived to carry the Republican Party banner. He has found favor through demagoguery that stokes fear of “others”.  Succumbing to marginalization is not a new concept; it has been germinating for generations. Mr. Trump did not have to reach far to pull it to the surface of national consciousness.

What is most challenging to understand is the embracing of this hate-filled rancor by the Republican Party.  In energizing these long ignored resentments, the Republican Party has branded itself for generations to come. The party of Abraham Lincoln, Dwight D. Eisenhower, and Everett McKinley Dirksen has become a conservative gaggle synonymous with racial and religious bigotry, intolerance, and exclusion. They have put the burgeoning populace support out of their reach for decades if not forever.  Their ruthlessness and vulgar resistance loudly ignores the changing of America. The Republican Party has ratified the marginalization of non-white, non-Christian populace.

The night Martin Luther King died; Robert Kennedy made, in my opinion, his most important speech. Within the body of that talk, he said this.  “In this difficult day, in this difficult time for the United States, it is perhaps well to ask what kind of a nation we are and what direction we want to move in.”

In the face, of this threat of dystopia there is encouragement.

Just below the surface of our country is a new nation forming. It is becoming a country filling rapidly with millions of wonderful “others”, owners of incredible stories.  Not bonded by fear and ignorance they are living histories.

The changing America has become a mecca for writers and authors willing to journal the truths about the millions who make this the greatest country on earth.  There are emerging unthinkable stories that compose an amazing populace noise of millions like my granddaughter. They will become the wonderfulness that will resistant the exclusionists.

Whether brilliant short stories that, pause the hourglass to long epics of struggle and love. Authors of the transforming America will make the world understand the greatness of diversity bonded with love and energized by intelligence.

ChapterSee wants to know what you think.