Book Review: and then he was Gone by Joan Hovey 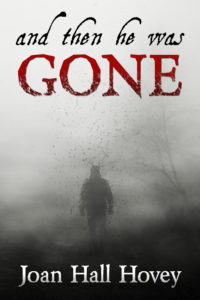 This author superbly captures the reader’s imagination with how a surrealism of fear grips a small town. It’s a time when the realization comes that one of their own is a monster on an elusive rampage.

This reading reminds me of old movies about times when bay horses and yellow surreys was part of this community and where some still prefer to read a book on lazy afternoons. We find these elements in small towns where master carpenters create woodworking genius.

They use the elegant simplicity of doweling for seamless joinery. The precision of marrying wood joints with varying sizes of wooden biscuits delivers lasting beauty. Much like the passages in this story where nuances of remembered moments from childhood, the scents, and flavors of cherished recipes, all joined together to tell a compelling mystery. Because we already know that in tightly knit communities, when cold-blooded murder comes to visit the list of suspects is short.

I found a growing admiration for the heroine. Effortlessly transitioning scenes from one tragedy to another, the author created a brave Julie Raynes. Like sliding fingers over woodwork and feeling the sensual velvety touch of sanded silk.  The precision of seamless story weaving tells of disparate events that evolve into an enjoyable whodunit. I began to understand how death becomes a gruesome trail of breadcrumbs bringing Julie to each painful realization.

I felt the isolation and emerging rage of the widow Julie Raynes.

She fought back the accusations that her husband had disappeared into another woman’s arms. There was bad rain the night Julie Raynes’ husband didn’t return home. It was her birthday and he had promised dinner out. She knew only that something awful happened preventing him from returning home from his woodworking shop.

As the months passed, Adam Raynes remained missing. The list of suspects, according to the local Detective Kevin Regan, narrowed to Julie. A dying aunt’s revelations of a ghostly visitation brought to stark reality that her carpenter husband Jeff had been murdered.  Heeding her Aunt Alice’s dire warnings Julie returns home with Endora the cat to begin her own crusade to find her husband’s killer.  Like the smooth joinery of carpentry, she must figure out how all the seemingly disjointed clues must come together.

At the whirr of the can-opener, Endora sat on her haunches and waited patiently, “When all this is settled” she said“, I’ll make us a tuna casserole, just like Aunt Alice’s.” As Endora daintily ate her meal, Julie put on a pot of coffee. She was getting the mug out of the cupboard when something Mrs. Olstein’s said came back to her. “You can barely tell where one thing fit on to another”. – And then he was Gone

Julie Raynes her husband Adam’s sudden disappearance left an unfillable hole in her life….in her soul. Suddenly she becomes a murder suspect. Just as sudden Julie realizes she must become her own hero.

Detective Kevin Regan didn’t believe her at first. He had seen too much and known too many bitter surprises. But time will out as his heart softens for the lovely brave widow Julie.

This is a good read. You take the book to bed before sleep…or on cozy rainy afternoons curled in a favorite reading nook.

I rate it 4 stars