Sign UpLogin
You are here: Home / Creativity / Are Writers Born with Muses?

Are Writers Born with Muses? 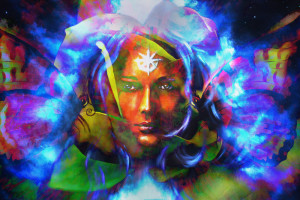 During the act of composing, a writer’s brain cells liberate the biochemical substance dopamine, along with other potent mood altering bio-substances.  Writers own truly unique mind tools.

I will not belabor within this small commentary on the documented neurological data that support why writers have amazing brains.  The artists that pursue language to convey their inherent gifts are a breed into themselves.  They are capable of bending cultural rivers and shaping populace ideas spanning generations.  Many languages have waxed further the eternal importance of the scribe.  Let me just say…whether it is a Greek goddess muse, an obsession or neurobiology – writers have unique brains, with the ability to create amazing things.  The act of composing or transforming new information into literature physically changes your brain.

The reasons for the evocation of a muse to begin a composition numbers as many as there are authors.

Perhaps the most amazing fact is that the authoring community finds its spiritual motivation within itself.  Many writers – perhaps most – will say that other writers inspired them to weave words of persuasive readings. Have you ever read a compelling book, poem, or short story?  Alternatively, found a life moment while exploring an autobiography and wondered where the author got the idea?

While composing this article I received a YouTube alert about the discovery of Cannabis in William Shakespeare’s pipe.  For me, it was akin to finding a nugget of gold.  Of course, his avid scholars immediately argued how something as common as marijuana weed could not be the liberator of Shakespeare’s genius. They proposed that it was merely pipe residue used for other things (still not clear how they drew that conclusion).  At the end of the day, it means little.  Cannabis did not create Shakespeare’s genius; if true, it merely freed it. Therefore, I embarked on a short research journey of my own to find out what other common means was there in the freeing of literary muses. Of course, the range of “whys” and “how(s)” seem endless.

Author Ellis Shuman writes in his blog about experiencing intense moments of creativity when he least expects it. He shares. “Creativity has a way of hitting me when I least expect it. While taking my morning exercise walk, a luxury I only find time to do on the weekends, ideas pop into my mind. Descriptions of characters. Things they say to each. Things they are thinking. What they are wearing. More and more of my upcoming work of fiction is becoming real to me.”

Similarly Stephen King often relates how a “chance encounter” or while witnessing an unusual public display of behavior ignites a story in him.  Often authors will embellish a real life occurrence, fleshing out the characters in back stories that later become literary hits.  Their writing muse seems to be sitting on their shoulder all the time looking for any opportunity to express.

Cupid whispered in the ear of the muse belonging to a young girl in love. Pride and Prejudice was liberated from the heart and mind of Jane Austen.  Filled with the blush of first passion for Tom LeFroy, she put pen to paper and created a story that remains in hearts for generations to come.

JK Rowling found the comfort of an old hotel located in Edinburgh Scotland as inspiration to complete her last Harry Potter work, drawing to a close (perhaps) the last chapter in The Hogwarts School of Witchcraft and Wizardry.

The common thread that appears to weave tight within the lives of the most prolific authors is one that begins in the early stages of life.  Perhaps the muses select us from birth or our eternal spirit has chosen this life to share the words that shape the lives of others.