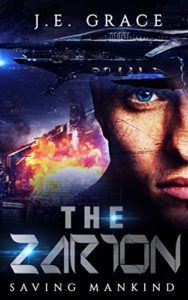 This old fashion space telling is reminiscent of watching old black and whites in my childhood. The storytelling possesses some definite tones of the traditional space tale. All of the components to an absorbing storyline centered in an alternative world are here.

Told in a mixture of first and second person, this narrative about space travel sabotage, intrigue, and love makes for an interesting tale.  But from a science fiction junkie point of view, this story lacks a believable “what if”.

This reader wondered where were the futuristic bells and whistles that take us to that alternate rim. Phones are wired. The story takes us into space, but there are no smart phones or cutting edge artificial intelligence. There’s no indication if this is a retro piece or dated narrative.

The Fallen is an alien race plotting to overcome Earth’s government to take control of our world. They plot with Interplay, a powerful corporation that secretly enters into an agreement of protection against the invasion outcomes.

Drafted by Interplay to head a team of scientist needful in the preparation for the invasion force, Davis Summerfield discovers the plot.  But his unearthing comes too late.  He feels powerless while witnessing the one by one elimination of his scientific team.

Losing trust in his government, he feels helpless to stop the pending annihilation of his planet.

Davis Summerfield is the main character who is kidnapped to head the Research Department on Alternative Studies for Interplanetary Colonization. Pulled from a self-enforced retirement he finds himself in the midst of a covert war between aliens and Earth.

Jeanette Simms is the female scientist that takes Davis’ heart.  She becomes a victim of the collaborators pledged to destroy the Earth.

A Critique: Grammatically correct work enhances the conveyance of a good story. Even the greatest of writers require great editing. This story suffers the confusion of a mixture of first and second person narratives.

Knowing and writing for your targeted reader persona is important to weaving a successful tale.

I offer a rating of 3/5 stars because this is a gifted storyteller. But this work lacks proper grammar and plausible composition.