Sign UpLogin
You are here: Home / Global Events / The Promise of Liberation fails the most vulnerable

The Promise of Liberation fails the most vulnerable 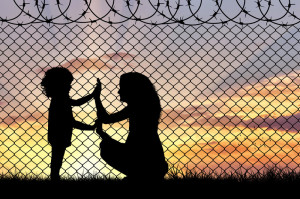 The river of humanity continues its flow to lands offering hope for life and sanctuary.  The scenes are hard to know and even more difficult to comprehend.  They move by the millions. Each person has a story and each tale its variations on a common theme that threads and connects lives with a single purpose…survival. Survival always comes at a price.

When a migrant family owns currency they may have enough to pay the ferryman to take them to safety.  Not enough money and parents or loved ones are faced with placing beloved children in the hands of strangers, neighbors, or older siblings. The chance for freedom is worth any risk.  But it is the realization of its perils that is most often visited upon the weak, the vulnerable, and the children. They are the first to be exploited by predators.

Escaping the horrors of war Europol guestimates that last year alone, 10,000 migrant children have been lost. The EU zone’s promise of safe haven has failed the most vulnerable. It is a recurring theme that has found its place in journalism since World Wars.  What are nascent in this old regime are the mediums that we utilized to convey in words and painful pictures the deprivation of migrating children.  The advocate clarion is the new disruptor, digital media. It calls out for content makers.  These stories of lost children are rapidly developing into rare opportunities to example writing styles and journalistic skills. This may sound opportunistic.  But it also serves to answer the question as to whether writing about the truth should be part of an author’s raison d’etre.

Throughout the history of man the lack or need for the basics of life is what fuels mass migrations.  The concept of people moving across borders, adopting new governments is not news…but in our time it has become “news worthy”.  Social media is the change agent or disruptor that becomes the beacon that illuminates the plights of women, lack of water, and the well being of children. It is the root cause in creating a child refugee. They are the common denominator across cultures, religions and sovereigns.

Surviving during harsh times is denied disproportionately amongst women and children.  They are the first to suffer deprivation and the last to receive salvation. It has become a 60 second media feed that demands well-crafted journalism. It is content that cuts through the jargon of daily social studies, to reveal the harshest realities. Attention is drawn to the plight of babies washed up along shorelines or standing in the cold and rain for weeks seeking safe haven. They become easy targets when families are separated or die from exposure.

At the end of every day it has been and always will be the writer who owns the front line in the war on truth telling.

The catastrophe of lost migrant children is not natural – it is man made.

Digitalization has become the great disruptor of our time. It provides instantaneous knowledge of what was once hidden. Good journalists understand that it may be harsh and often dangerous to illuminate places where the lowest of human kind dwells. It is an unnatural man-made place of gloom and decay. But it is also a place reserved for responsible article writing and great storytelling.

In sharing the awareness of the plight of lost or stolen children, writers become the great disruptors and part of the solution

ChapterSee is home to great storytelling. Let us know what you think.