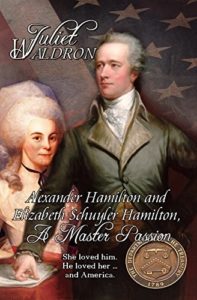 In British West Indies a little over 50 years from its beginnings, Alexander Hamilton was born. It is hard to describe this amazing man living both a structured and unstructured life.  Weaving enhanced accounts of his career into compelling storylines isn’t irresistible…but this author offers a fascinating read.

I’ll admit to a lack of interest in our glorious and at times shallow history – compared to older cultures. At best, stories about a nascent Americana can be sometimes laborious to read.  But the most enjoyable parts of this read and the objects that are most engaging are passages that center on the boy Alexander.  They seem to fulfill the promise of an adult Hamilton who became fascinating in both real life and in this fictionalized account.

Written in period style in language as rich as 18th-century tapestry, I found the reading extremely detailed. But that is what aficionados of this period love and enjoy. It’s well-crafted tales like this about the proclivities of that period that lovers of history….love. The reading transformed this reader to an interested observer. The hardships of hard labor and harsh working conditions seemed mere steps from David Copperfield.

Waldron serves the premise well that childhood struggles shape the character of adulthood. In Hamilton’s case, it is his struggles to survive childhood coupled with the strong and willfulness of his wretched mother. Both helped in carving the character of a man that would later become the much-loved subject of plays, movies, and song.

It is also a telling fact of how the culture of America has chosen to embrace the ideology that our founders were stalwart defenders of Christianity.  Most of our strong and resilient historical patriarchs didn’t hail from stern Christian stock, rather from successes earned with skill, determination and a strong self-belief and love of country. With that comes a type of intelligence, in my opinion, that was needful to build the character of a nation they aspired to.

“There had been pain, shame, and the choking tears he had striven bot to shed, the grotesque finale enacted amid his opportunity. Drunken sleep came to his master, and Alex crept away. Sliding out of the bed, intent on escape, he held his breath. His knees shook with each creak if the floor. He found his breaches and left with them in hand, letting himself out through a verandah door.” – A Master Passion

It was a time of war, love and the birth of a nation and a better than fiction story about the life of a man born to live and lead on his own terms.

My favorite character is young Alexander Hamilton. He learned to put aside childhood lessons of bitter betrayals in order to love a country and a woman. His will to build a nation survived amidst hardship and abandonment.

He came to be during a time when the British West Indies was struggling to gain its own independence and existence. He was Alexander Hamilton, one of the founding fathers of our United States of America.

An artful and illegitimate boy he was born to a mother left alone with two young boys. Together they struggled to come to terms with deep disappointments, abandonment, abuse, and poverty. Rachel Faucette a strong-willed woman fed all of her anger and will into her strong but small boy who later used that will to not only survive but also strive to become one of pivotal leaders and hero in the birth of our nation.

He married well if not his first choice. But Mary Schuyler was devoted and in love with Alexander. She understood best his love of country and commitment to its morals and tenure. Hard work and military bravery won him political bona fide but it was that political talent (that he shunned) and his extreme sense of honor that rewarded him with an early death at the age of 47 years.

Betsy Schuyler is the wife of Alexander Hamilton.

The author has skill in storytelling.