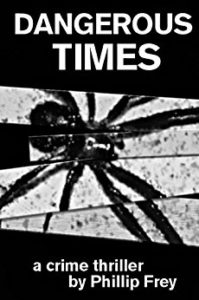 I went on a ride along yesterday with a man who killed for pleasure. This was a reading journey I’ll not forget.

I found it hard but fascinating sharing the thoughts of an unapologetic soul who found his pleasure using a blade to slice flesh. Women seemed to be his game of choice. The prettier the better. It would perhaps be easier to accept if this twisted mind was housed in an unattractive body and face. Perhaps some mindless being brought to ruthlessness because of a tortured childhood, but no. The author created the type of villain we love to hate. Beautiful blonde, male, brilliant and indulgent in his refinements. This was one of the characterizations in this work that makes it a good read.

But still, it’s hard living in the head of a psychotic murderer – even for a few hours. And even when the author of the tale is so good at telling it.

“Frank was the kind of killer who didn’t like to get it over with quickly unless he had to.” Dangerous Times

My most favorite thing to do is predict mystery outcomes. I’m usually right. the great reveal is that the author is so adept at introducing twist and animated characterizations – I became a captive audience.  Scene by scene my predictions fell flat.

The deal is that a lot of money lies at the heart of this tale and its characters.  Each one has a compelling reason to have it.  Disparate themes, scenes, and storylines come together in a brilliant who done it.

John Allen Kirk the ex-Navy SEAL has a need for a new life and a way to relieve himself of a woman he no longer loves or respects.

Frank Lester Moore is the monster with a brain. This is where the author makes his biggest impact on this reader. This evil is a well-crafted genius. Extreme malice of will and calculated forethought comes to mind.

Ben Hicks is becoming a failure as a cop and human being. The idea of getting his hands on enough money to make right al his wrongs is worth any price. Until he met up with John.