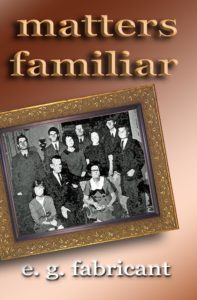 There’s something that warms the cockles of the heart when you enjoy the written work of seasoned writers.  The elegant, eloquent yet laid-back style of prose warms the heart and coddles the soul.  This read is like enjoying an American classic filled with memoirs of a 60s classic montage done in suburban family social studies.  Every gem in this read stands alone as a reminder of what matters most.

Storytelling is written in the casual style of Midcentury America always prompts recollections of small towns nestled within rust belts. Part of the Route 66 Conoco commercial memoirs. And these characterizations ring true to that period of slow awakenings and troubled times amongst families.

The short titled “Chosen” is my favorite. A gentle nod to Sci-Fi, it is poignant. Wrapped within the greater work composed of common emotional and drama, it holds a brief view of “what if”.  It rolls like this.

What if the seemingly homeless man, daily ignored and invisible, is a being who serves as steward of humanity and scout for others born to the cause. A brilliant simple tale that is brilliantly written.

“Halston spun around on his seat. For the first time, he noticed that a smattering of the throng–two dozen, maybe-were wearing sunglasses. He honed in on a few of them. As they met his gaze, they glanced briefly at Will and opened their collars. Each revealed an amulet, all identical. Some opened nearby children’s collars, showing the same thing. Halston returned to Will.” ~ from Matters Familiar E G Fabricant

I absolutely love a good storyteller better than anything… almost. I enjoyed the read.  The flow is surprisingly easy – the cadence is well done going from one short to the nest.  To the author – these are truly matters familiar.