Book Review: Talon, Come Fly with Me by Gigi Sedlmayer 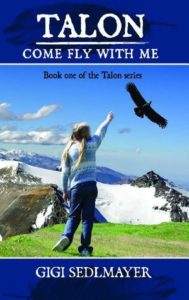 I learned today that it takes a giant condor to raise a village.

I’ve never read a tale about the bravery, love, and honesty of a pair of condors. They dominated the storyline, transformed humans to unapologetic voyeurs, and that is ok.

I learned, in a very enjoyable way that one of the globes most compelling birds is perhaps the most intelligent as well. And although this tale is precious and a fun read to let the truth be known, these big birds in reality often enjoy performing aerial feats while embracing human friendships.

Like the small little adventurous girl, name Matica from Australia. We envy the freedom of soaring from mountaintops with those we love.

The opening scenes involving the protagonist, the poachers and the father Crayn and daughter Matica’s heroism in saving the condor chick Talon was absorbing.  The story moved quickly from these passages and made this reader embrace the little condor named Talon.

This story artfully illustrates how a wonderful bird named Tamo and his mate Timo helped their new friend Matica become the heroine of a Peruvian village.

It brought to life a delightful tale filled with bonding between a little condor, a family, and a misunderstood little girl who through bravery learned her own worth.

This is a story about the passage to greatness for condor named Talon. His sensibilities and caring for his little savior Matica managed to teach his world the value of friendship and trust.

Matica is a young girl from Australia who is smaller than most children are. Her great reveal is the big brave heart filled with love for the endangered baby condor, Talon.

Tamo and Timo are rare condor mates living in the mountains of Peru. The trouble that pierces their otherwise peaceful existence is the theft of their prized egg. A bond that grows between the condors and a young transplanted girl creates a tale of bravery, discovery, and commitment to love of the birds.

Crayn is the father teacher come to Peru from Australia. He learns how brave and determined his little girl Matica is.

This good read is an absorbing tale that teaches us how important the giant condor truly is.

I rate it 4 stars