Book Review: Whatever Happen to Virginia Dare? by Lee Dorsey 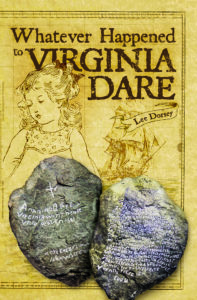 Queen Elizabeth sent them to intercept a Spanish galleon and then sail back to England with her treasure. It seemed an easy enough royal task for a worthy seaman. That mission soon changed. The captains of The Ark Royal and Mary Stark are conscripted to the greatest adventure of their lives…English colonization of the new world.

Although filled with wonderful detail about the sea this is a slow read.  But the author explores a colorful tale of the missing first white child born to the colonies. It is a much-told story that has come to the attention of numerous legends and folklore.

What made this an enjoyable read was the historical detail.  This story about the ships and men exemplifying the powerful navy is immersive and captivating.  It is hard to believe that the British crown had such power during this period of exploration and bravery.

Queen Elizabeth dispatched her royal navy to do fight England’s wars, make friends, and bargain with family and foes. But perhaps the most important task was in procuring vast riches, foreign soil, and peoples for her country. One of the most important and least understood was the Americas.

This is a story about that land that was to become one of the most important acquisitions in British history. Her majesty’s ships the Mary Stark and Ark Royal brought back to England more that than economic treasures from the New World. They were part of America’s first conspiracy theory and much-preserved folklore of the first white child to be born on these shores.  Her name was Mary Dare.

Although the history lesson is replete with facts surrounding good storytelling – the read was more like a history book.