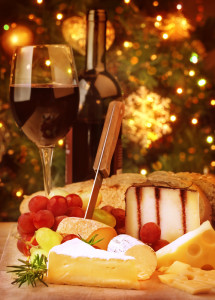 Blended family tables hold the greatest wealth of prose rich in storylines and tales that mirror the diverse human condition.

The holidays have passed leaving us with new memories of the common familial conversations that center on a mixture of personal politics and daily living while visiting our dinner table. These festive times always leaves in its wake a cornucopia of tales to be told. To me it conjures up images of the authors that ignore the dogmas of the season, preferring to forego the festivities while the world endures its celebratory throes. It is within these times that the genius of Lillian Hellman comes to mind.

Images of a half smoked cigarette dangling from purposeful lips and a bottle of bourbon with a half filled tumbler standing close on a table holding an old typewriter.  It is all about the story.  Lillian Hellman’s characterizations came alive.  The clacking of the typewriter dictated the scenes of plays, dramas, love stories that became a clarion for adoring fans to renew memories that became the staff of life. The tools of the writing trade have changed but not the imagery of word smiths fashioning a story.

The atmosphere of holidays brings out the best and the worst in human nature.  The buffet of emotions serves up an abundance of writing material.  We enjoy the old habits of reminiscing of what was and of the hopes tucked away in mind drawers of what could have been. These images spring to life as if just the proximity of shared bloodlines provokes their emergence. The common nuances that compile ordinary life were fodder for Lillian Hellmann novels and plays.  They are Norman Rockwell mages brought to life in words. Hellman’s iconic works are recollections and emotional impressions painted in relief with prose. Perhaps the most beloved scenes and characterizations were of her own memories of friend Julia.

From a scene in her screenplay Julia, Lillian’s description of seeing her childhood friend after a long absence describes perfectly a breathless emotion that made an observer a participant. In just a few words she made us understand the complexities of the relationship that cloaked the bond.

Lillian Hellman was a master at creating stories subscribing to the human peculiarities that were fed by popularized dogmas, making them our memories.

Scenes in smoke filled crowded cafés and posh late night dining rooms with mirrored walls flaunted views of the gay after theater crowds. It was those “putting on show” that produced the cacophony of laughter and cheers. Dressed in ball gowns and bespoke tux.  Cigarettes hung from full red lips and bejeweled fingers caressed martinis. Lillian Hellman belonged to this magical time when writers lived the adventure and were the main characters in their accounts. Celebrity writers were bigger than life, grander than the characters in their novels.

To me Lillian Hellman is the epitome of a writing culture where the abilities to relate human emotions in the most undeniable terms was supreme.  Minus the modernity of technology there existed the raw talent to tell a captivating story.

Now it is your turn to recollect the conversations and activities that filled the days of your holiday season. These are the moments that offer writers the greatest gifts of burgeoning content and immensely rich storylines. The tales of two cities came to dinner, hung bells on holiday boughs, and met up to catch up on what had passed in your absences.