Sign UpLogin
You are here: Home / Biography / Is a writers’ raison d’etre inherent or created?

Is a writers’ raison d’etre inherent or created? 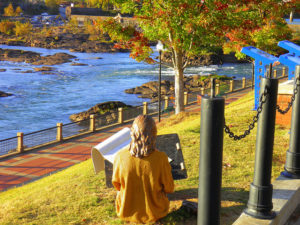 “I felt that I had to write. Even if I had never been published, I knew that I would go on writing, enjoying it and experiencing the challenge.” – Poet Gwendolyn Brooks

She wrote 75 poetries and was awarded the Pulitzer Prize for her poem Annie Allen. Gwendolyn Brooks attended Wilson Junior College in Chicago where her family moved during the great migration from the south.  She like many writers of that time was unable to attend top tier schools yet gifted to the world some of the greatest literary works. Her poems moved the hearts of a nation and earned her many literary awards.  Gwendolyn Brooks did not learn writing skills from a top tier school. But her body of works opened the door to becoming a celebrated professor within the halls of leading universities.

I met her a few years before she left us. The encounter found me only able to repeat utterances of gratitude while she offered a brilliant smile and warm words of encouragement.  Later she sent a small autographed book that I still treasure.

“I cannot and will not cut my conscious to fit this year’s fashion…” Lillian Hellman, May 19, 1952

Lillian Florence Hellman was born in New Orleans, Louisiana, she studied only two years at New York University and attended a few classes at Columbia.  Yet celebrated for generations as a supremely gifted and best known playwright and writer. She was most impactful as a playwright.  A few of the most notable were the Broadway hits The Children’s Hour, later brought to movie screen and The Little Foxes that also became an award winning screenplay. My favorite was Julia. Her prose was compelling and still stands as a beacon to what can be achieved in creative writing.

Anne Rice, born Howard Allen Frances O’Brien became the most read author of all time with over 100 million copies of her works sold worldwide. Known as an American gothic writer she received her education from San Francisco State University.  She expresses her craft in several pen names.  To name just a few, Ann Rampling in Exit to Eden, A. N. Roquelaure in the erotica series Release of Beauty and Anne Rice for the populace Vampire Chronicles.  Her works have been adapted for big screen and television. From tales of the supernatural to Christian literature.  Her large body of candid and imaginative literature have crossed cultures and generations.  We can’t say that her education resulted in her lifetime of award winning works.

Yet many stellar authors can also proudly wear the school colors of top tier universities.

George Raymond Richard Martin (born George Raymond Martin) and better known as George R.R. Martin or GRRM is currently best known for his literary work A Song of Ice and Fire. The novel was adapted for television in the popular HBO series Game of Thrones.  I became a fan in the 1980’s with his writing contributions in the television hit series Beauty and the Beast.

There is a thread common to award winning writers of all genres. It presents itself as a brilliant translucent notion that is weaved into compelling whimsy and contemplative literature. Not all writers choose to create. Some find their genii in becoming a supreme editor. They rework storylines and help bring to life compelling narratives or political satire. Another writer may feel better suited as a brave journalist dedicated to bringing light to the world. The one common theme is that they possess the overwhelming need to express and create in letters.  They make whimsy that breaks through the common morass of life.

The one compelling message that our most celebrated writers give us, is that a formal education does not guarantee a successful author. The incredible genius of storytelling, imagination, communication and the conveyance of the reader to another realm is inherent.

Whether a top tier school like Evanston’s Northwestern University or a more common place of teaching like Chicago’s Wilson Junior College, formal educations supplies the writer with needed time to explore their craft.  It offers important feedback in how to grow while furnishing a rich laboratory. These institutions teach authors how to package their work while making important collaborations.

A good education gives a writing god the time to discover while tailoring their own unique style.  There are many wonderful tellers of stories waiting to be explored within ChapterSee.