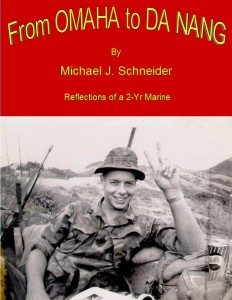 “Hey, Mac. Here’s another bullet stopper for you.” – From Omaha to Da Nang

This first person narrative is a must read for anyone interested in the history of the Vietnam War and a nation filled with unsung heroes.

The author offers an honest conversation of his time as a Vietnam Marine. The style is conversational which offers the feeling of sitting in a bar and just listening. I liked it. Although replete with arguable truths, this reading is not for the socially squeamish. The writing is unvarnished. The Marine Corp was about creating soldiers that are best of the best. All should be reminded that becoming a United Sates Marine is a lifetime commitment, in and out of uniform.

In my humble opinion, this book should be required reading in today’s high schools. We live with generations who will never experience mandatory enlistment.  Although modern day military service to country is a contemporary phenomenon.  Old school selfless acts of extraordinary bravery still holds special meaning whether voluntary or conscription.

The read is chock full of social generalities that perhaps belonged to the mindset of that time.  But was and still is very much part of our country’s psyche. I began reading this during the Charlottesville disturbance.

This is an unapologetic treatise of one man’s experiences during the Vietnam War. Conscripted into the Marine Corp his honest recollections are vivid and makes real a time many have forgotten.

How does a brave young man from Omaha Nebraska survive to be the storyteller of life in Vietnam?  The sharing is vivid and real.

Michael Schneider is the courageous and heartfelt teller of his tales in Vietnam as a United States Marine.

Disclaimers about racial encounters may help but will not assuage the discomfort felt by culturally sensitive audiences. Taken objectively this is a good read.

It’s little-undiscovered gems like this book that makes reviewing rewarding. Thanks, Michael Schneider.